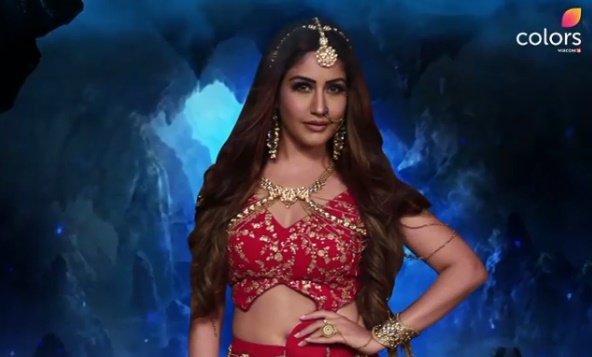 Naagin 5 23 August 2020 Written Update Episode 5 in Hindi Telly Updates, Voot, Colors TV begins with jay searching for his phone & think him self why aruhi cound’t phone me, Then phone to bani asking her i waiting for your call. Bani says i will call you 30 minutes ago, Jay gets stunned asking to bani where you now.

Then bani says went to nearest police station. After that veer father says we try to keep veer in dark place but you are every time went outside along with veer in day time, Later other cheels saying what he did for noor but veer said she can’t deserved to die.

Finally bani meets police station, open the video which she captured when veer covered noor body with dust, given to the inspector. Inspector seen the video & delete the video, asking to bani where is the proof. Then after bani said to inspector i will file case on you and went from police station.

When bani went outside veer came opposite side of her, seen both one to one stops. Veer says asking me sorry & give me a hug. Later bani says you killed my friend, i have a proof let’s seen who save you.After that veer says i will you 30 mins ago. Bani think her self asking him you call from jay phone please handover phone to me & leave him. After that veer calling to his family members asking about noor death. At the same time jay phone to bani said i will send to you my friend address you check their.

Later Veer father said to anish must searching for bani, anish said she already reaches the police station. Later bani try to reach the address what jay said but veer seen the bani when he drive the bike, stop the bike. At the same time veer seen anish, think him what he doing here.

After that bani stops the auto, asking to leave from here. But Veer stops the auto, given money to drive said to him where she asking to drop you must stop their safely. Then veer seen his friends why they follow to bani & he also follow the cheel.

But when reach the auto bani not in the auto, Asking to drive where she is. Auto driver says she leave the auto middle way. Then Veer seen her, follow her when she reached dhobi ghat. At the same time cheels seen veer and think him self why following her.

Then Jay phone to bani asking her where are you now. She said explain everything, Jay said send you location i will guide you. At the same time veer father reaches dhobi ghat asking to veer what is the time now, slaps him and asking to him leave the place.

Bani think her self where is jay he still not came here. At that time jay slowly walking on the road, Bani reaches the house what jay said but when she reached already killed the person. Then her wife says ichhadari cheels killed my husband, she also formed as naagin when cheels came to kill her. Bani seen everything what happen in front of her, Follow the naagin where cheels brings, Send voice message to jay.

Finally cheels leave the naagin (vani) at middle of the forest. Then bani found vani, Vani asking to bani please leave the place. After that cheels turned into men try to attack on vani in front of bani. Other end jay try to use inhaler to breath air. After that noor and bani turns into naagin come to save vani