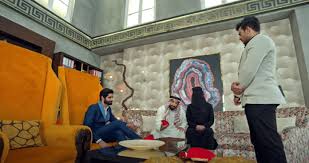 In previous episode Vansh and Riddhima celebrated their happy moments and other end ishani said to anupriya i couldn’t help you, If riddhima know about us she informed to vansh. Once ishani, anupriya speaking together kabir comes to kitchen and informed to them if anything happens to riddhima and her child i will seen your end.

Vansh approved, Handover the diamond to kabir, Kabir given to arayn After that aryan changed the diamond, handover to vansh duplicate diamond. After that kabir said this deal don’t end because my wife do not want this diamond and try to went out the room, Vansh and angre holds heir guns and asking to sheikh couples please stop.

Ishq Mein Marjawan 2 9th March 2021 Written Update (Promo/ Spoiler/ Preview) provided here below once available. follow zeal study web portal. Here it is the promo i.e riddhima sleep in their room, Anupriya wear block color suit and holds the knife to kill riddhima. Other end kabir and aryan try to escape from the VR Mansion. But vansh, angre holds the weapon and asking to them remove your costumes.

Here it is the upcoming episode story i.e Vansh said hands up, angre holds the gun but kabir, aryan try to escape from them. But vansh catches them and asking to couples please remove the costumes At that time aryan, kabir removed their costumes. After that vansh shocked and asking to aryan i don’t think you acts like this. Aryan said because of kabir i will done this.

After that kabir said to vansh you don’t kill me & if you try to kill me i will destroy the diamond. Then vansh said you think like child because this diamond is duplicate and it’s cost only Rs/-50 rupees. After that vansh asking to kabir i want my diamonds but kabir hits on vansh hands and vansh lose the gun. Later both vansh and kabir fight each other.

After that vansh said to kabir you need only one bullet, Kabir said again you don’t kill me because when i am get a change to kill you i don’t do that. But vansh try to kill kabir and kabir escape from him. After that anupriya meet his son at outside. Before kabir escaping from vansh anupriya switch of the main. Later kabir said sorry to his mother and said because of you i will stand in front of you.

Also anupriya said to kabir you leave the VR mansion and i will informed to you everything what happen at VR Mansion. At that time riddhima speaking with doctor and said to doctor baby is fine. Anupriya, Kabir shocked to listen riddhima child is alive. After that kabir, anupriya think why riddhima said lie to vansh. Also kabir asking to his mom don’t do anything to riddhima and her child.

Vansh informed to riddhima tomorrow i will host a party to my enemy’s after that we both leed happy life. At kabir room think himself i will happy because riddhima child is alive.