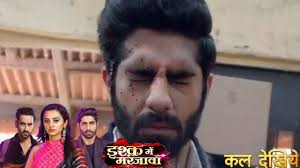 Ishq Mein Marjawan 2 4 February 2021 Written Update begins with Vansh come out from VR mansion and drive his car and Kabir said to vansh all the best. Later vansh reached the his destination along with guitar. Once read the his destination his opponent seen him, Vansh opponent said to him i think we are not met again and asking to vansh let’s begin. After that vansh opponent asking about diamonds, vansh asking to him cash first. Later both are exchanging the diamonds and cash. At home riddhima close the doors and feels fear to seen toofan hits the city and think about vansh. At that time riddhima recognized the gift box.

Once riddhima open the gift the box she seen pink color saree, think herself i will ready before vansh reached the home. Other end jang try to check himself diamonds is original or not and said to vansh this diamonds are not real. Then vansh shocked, Riddhima think herself what siya said to her. After that jang asking to vansh let’s check this diamonds real or not. Vansh think himself how it is possible, Jang try to kill vansh but he hits vansh face. At home riddhima when wear the banglos suddenly broken. Later riddhima phone to vansh but his phone not reached.

Then riddhima asking to bappa nothing happens to vansh. At jang spot vansh kills oppenents and kabir entered to seen. Other end riddhima comeout from her room. Daadi seen riddhima and shouts riddhima where are you going. After that sayi, ishani, angre seen riddhima, Later angre asking to riddhima please don’t went out side. Also angre said to riddhima it’s boss orders so you can not went outside. Then riddhima asking to angre why you not went with vansh. Angre says it’s boss orders. Other end jang holds his weapon at the same time kabir also holds his weapon and shoot jang.

Later vansh recognized kabir kills jang, Vansh asking to kabir i don’t need your help. After that daadi asking to riddhima don’t feel stress, Ishani aslo asking to riddhima same. After that riddhima asking to ishani if vansh not in trouble why he can’t lift the phone. Other end jang asking to his guards apply plan b. Then vansh asking to jang what is plan b. At that time jang blast the house and shoot on vansh leg. Angre said to family members i think vansh in trouble that’s why he can’t lift the phone. At jang place he blast the house, At VR Mansion at pooja room because of diya clothe burns. At that riddhima gets unconscious, Once riddhima gets conscious asking to angre you still not went outside to searching for vansh. At that time vansh, kabir reached the home