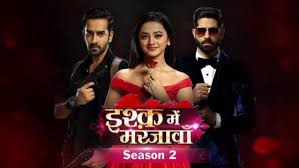 Ishq Mein Marjawan 2 29th December 2020 Written Update Telly Update for episode 152. Riddhima life in danger because unknow person try to create kill her. In the middle of the party riddhima recognized the slip, read the slip. After that riddhima comes to backyard to find out what exactly in the slip. Once come outside and reached the backyard she recognized a car.

Later riddhima enter the car to find what is inside. At that time unknown person comes to backyard and thrown the smoke bomb into the car and close the car. Riddhima suffering with low oxygen level inside the car and asking to unknown person to open the door.

But unknown person leave the area. After that vansh searching for riddhima and comes to where car is, Riddhima seen vansh but suddenly went unconscious mode. To know today episode i.e vansh save riddhima life, who try to kill riddhima follow zealstudy.in web portal.

Vansh said to angre you must keep eye on ahana. After that vansh searching for riddhima, Riddhima come outside and verify what inside the car. At that time mask man comes to her and thrown her into the car and thrown mask bomb. Riddhima asking to open the door. Later ishani comes to vansh and given chocolate cake. At that time ishani had mask it means she is the unknown women.