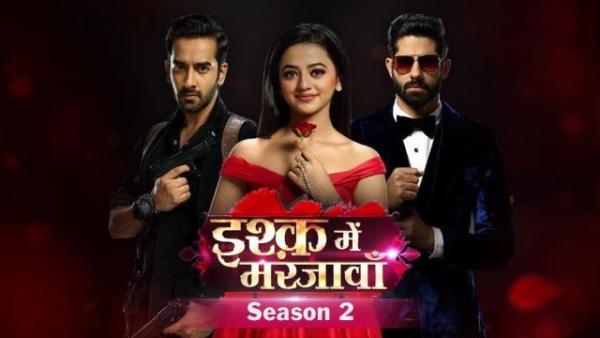 Ishq Mein Marjawan 2 27th February 2021 (Saturday) Episode 204 available on Voot Select app after 7.30 PM. Previous episode story for IMMJ2 is riddhima said to vansh we break our relationship now because you couldn’t care about our child. But vansh said to riddhima not yet complete our conversation because i will leave now, i have some urgent work. After that vansh meet angre, angre said to vansh some one who close with us started dealings with jang.  Other end kabir speak with jang, Vansh said to angre we catched who starts dealing with jang. Riddhima again finds diamaa mysterious movements i.e she speaks with unknow person on the phone.

But because riddhima mistake (she touches the table) diamaa stops speaking phone conversation and what is the sound. Then riddhima thrown apple and leave the kitchen and went to chanchal room and knock the door and said daadi forget her mobile in your room recognized her test reports. Chanchal return to her room, Riddhima hides her self

After that Hospital staff taken riddhima to the hospital at that riddhima try to asking them please leave me i will went to my home. After that riddhima died and family members taken her to grave yard and performing the rituals and promo end. To know upcoming story follow zeal study.

Chanchal to listen sound come to her room but riddhima hides her self. After that chanchal check the room and she couldn’t recognized anyone, leave the room. Once she leave the room riddhima identified unkown person phone number who called to her. After that unknown person phone to her and asking about abbertion but riddhima cut the call and think herself why diamaa, chanchal try to do this for me.

After that riddhima went to her room, Riddhima thrown flowers on riddhima, IMMJ2 title track played. Later riddhima said to vansh we soon become a parents but you do not care about our child and make a line with flowers and said to vansh this is the line between us and leave the room and close the door. Vansh asking to riddhima please listen my words.

Later riddhima went to pooja room and performing harathi and asking to durga maa, lord ganesh what i do now and asking to maata rani please avoid problems between vansh and his child. At that time kabir comes to temple room and asking to riddhima please tell me your problem. But riddhima said no, Kabir said to riddhima you still can not believe me, once again remembered to riddhima i will save your life.

At that time aryan brings a box and given to riddhima and leave the pooja room. Later riddhima recognized a visting card of doctor. Again riddhima gets a call from unknow person. Other end chanchal speaking with someone. At the same time aryan, diamaa also speaking on phone and riddhima starts crying. After that riddhima went to her room and sleep. In the midnight riddhima wake up on the bed and searching for vansh.

Again riddhima gets a phone call from unknown person, Unknow person informed to riddhima about time. Other end riddhima, angre went to jang area to know the who is person deal with jang. After that kabir speaking with jang about partnership, Vansh ready to attack on jang. Kabir said to jang our relationship just begins and said to jang for me understand is most important other then money, bussiness.

Finally vansh attack entered where jang and kabir is try to check who is the person deal with jang. Other end chanchal said to daadi i think something bad happens at home. To know vansh know the kabir secret and what happen to riddhima stay with zeal study portal.