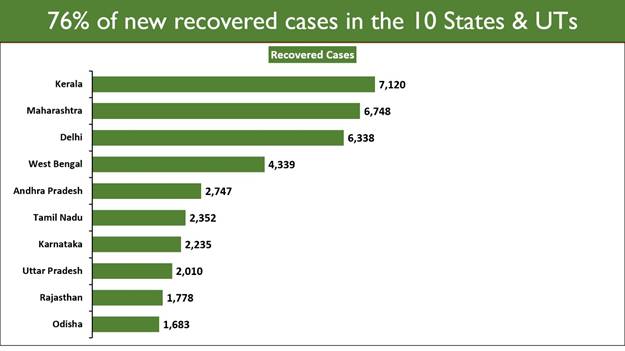 India reported COVID-19 positive cases is 45,674 in last 24 hours and recovery rate is 92.49% is a reflection of the 78,68,968 recovered cases. Ministry of Health and Family Welfare released today press release regarding latest covid-19 cases. According to that less than 50,000 cases reported in last 24 hours, New daily case have been trending downward since 15th of October.

Also, MOHFW says Keeping with the trend of recoveries outnumbering new cases, 49,082 patients have recovered in the last 24 hours. This trend has been observed for the 37th day today. This has played a pivotal role in pushing down the active caseload which is presently 5.12 lakhs.

The active caseload in the country is 5,12,665 today. These cases contribute only 6.03% of India’s total positive cases, indicating a sustained downward trend. The Recovery Rate of 92.49% is a reflection of the 78,68,968 recovered cases. The gap between Recovered cases and Active cases presently stands at 73,56,303. This gap has been steadily increasing.

Also, 76% of the new recovered cases are observed to be concentrated in 10 States/UTs. Kerala displaced Maharashtra to have the maximum number of single day recoveries.7,120 people recovered in Kerala during the last 24 hours followed by 6,478 in Maharashtra.76% of the new cases are from 10 States and UTs. Kerala reported 7,201 cases in the last 24 hours followed closely by Delhi with 6,953 cases. Maharashtra has come a distant third with 3,959 new cases yesterday.

Also, 559 case fatalities have been reported in the past 24 hours. Of these, ten States/UTs account for nearly 79%. More than 26.8% of new fatalities reported are from Maharashtra (150 deaths). Delhi and West Bengal follow with 79 and 58 new deaths, respectively.