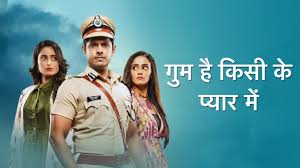 GHKKPM Ghum Hai Kisi Ke Pyaar Mein 19 January 2021 Written Update for Episode 92 Season 1. Here in this episode Sayi sit alone in her room Devyani comes to her room. After that sayi asking to devyani what happen. Then she said my husband was also studying medicine and he would have become a doctor, by now. Later sayi asking to devyani who’s your husband? what’s is his name. Once sayi asking those type of questions devyani sit silently. Few seconds later devi says my husband name is.

After that Sayi went to college and at college when she going to class room suddenly hits someone. After that sayi said to him iam so sorry. At that time that person says that’s okay, introduced himself as Dr. Pulkit Deshpande and promo ends. Today GHKKPM 19 January 2021 Written Episode released on Hotstar 6.00 AM. All the premium subscribers check the story of Ghum Hai Kisi Ke Pyaar Mein once realeased on Hotstar.

In Previous episode devyani recalls her past and said to sayi i am married and i have a son when she prepared for exams. Later sayi asking to devi who is your husband and what he did. Devi says my husband also done medicine and he will become a doctor. Day changed sayi ready for exams and comes to dinning room to done for breakfast. Once comes dining area sayi said to bhavani i am sorry i didn’t wake yo early and i can’t do the chores in the kitchen today. Also, sayi said to bhavani from tomorrow i will go to college after doing my work.

Pakhi asking to bhavani we are all asking sorry to sayi because what we do for her. Also, pakhi asking to sayi please don’t go to the college with empty stomach. Later sayi said to pakhi you and karishma stands silently and seen what happen here. Pakhi says yes sayi you did tamasha here and we are all seen what you done here. Virat asking to pakhi why did you extended matter, Pakhi said to virat she is not a kid. Also, patralekha asking to virat your wife said to us she independent women but what happen to her now. Later another family member said at most of the time karishma and patralekha done work at home. Sayi said to her kaka because i will studied entire night for my exam.

Later sayi said to family members from tomorrow on words i will complete my work and went to college.Virat asking to sayi come with me i will drop at your college but sayi says no i will went to college on bus. Virat asking to family members today because of you sayi can’t completed her breakfast. Pakhi says to virat we don’t do that and bhavani asking to sayi let’s completed your work and done breakfast. Afer that sayi comes to colleges and hits guest lecturer. After that lecturer introduce as a Dr. Pulkit Deshpande and iam guest lecturer. Later sayi introduced herself, Pulkit asking to where are you come from. Sayi said to him where her come from and also informed to him about her marriage