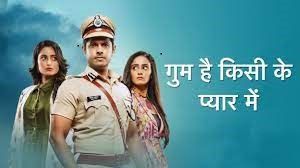 Ghum Hai Kisi Ke Pyaar Mein GHKKPM 13 August 2021 Written Update begins with sayi, virat reached the hospital. After that doctor comes to ward to check virat. At that time sayi explains to doctor what she done before reached the hospital. Doctor asking to sayi are you doctor, Sayi says i am medical student. Doctor says good job you done first aid to the virat because it’s reduce the pain. Other end virat, sunny, mohit still searching for sayi. Virat think himself she went to nagpur, Sunny says she don’t know the way. Virat says may be she went to the resort.

Other end samrat reached nursing home and asking to his aunt what happen to virat. She says what happen to virat. After that virat comes to the ward room along with sayi. At that time sayi seen samrat but samrat doesn’t know sayi is virat wife. At home pakhi mom speaking with bhawani and said to her pakhi stay with me at my home. Bhawani says if pakhi getting into normal mode stay with your home we accepts your decision. Pakhi says i am stay with my parents only. At nursing home sam aunty introduced sayi to samarat.