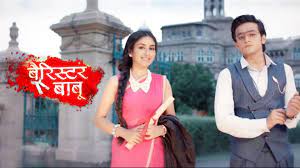 Barrister Babu 23 September 2021 Written Update For 373 begins with bondita. Bondita said to subodh i am wife anirudh and i will come here to defend my husband case. Subodh said to trilochan i think you joke with me, Bondita given napkin to subodh and asking him to keep with you. Subodh said to trilochan last 15 years i will take up the cases and defend the case and not even lose one case. Bondita said till you don’t lose the case but today you lose the case. Subodh said to bondita i will play the game with mind and you are a women.

Bondita said lawyer is lawyer and not male or female. Subodh said to bondita i will not takeup against women. Bondita said if you don’t take up this case you lose the case. Then subodh said i will take up this case and informed my voice against your husband and it causes you lose the case. At that time bondita informed her full name to subodh. After that trilochan speaks with bondita and said to her at any cost we won the case. Suddenly tea seller comes to bondita and hits her. Trilochan angry on tea seller and asking to bondita go to the wash room to clean the dress.

When bondita went outside judge enter the court, somanth informed to his dad hearing starts soon. Bondita comes to the wash room and asking to peon please open the doors. Other end anirudh enter the court, Subodh given all case papers to judge. Judge asking to anirudh where is your lawyer. Trilochan said she went outside and asking to somnath call to bondita. After that bondita recognized subodh done for me to won the case