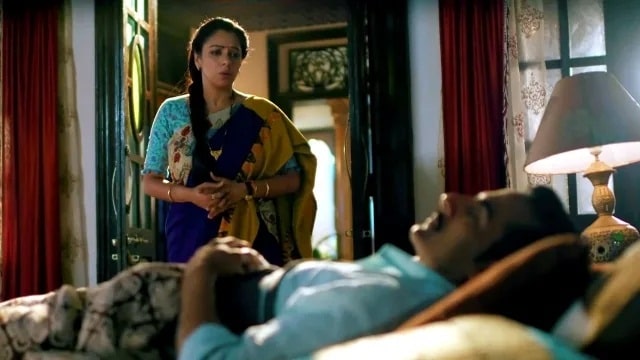 Anupama 20 January 2021 Written Update for Episode 165 Season 1. Anupama said to shah it was your decision to love another women to avoid your wife and it is my decision to not take you back in my life. Once said her words to shah anu leave the shah room. After that shah think himself anu i know that we are miles apart from each other and despite living under the same roof. Also shah think himself but i will definitely close this distance. Other end kavya met her boy friend and said to him your actions have also forced me to take a decision and Maybe that is the best decision for the both of us.

In previous episode rakhi brings the washing machine for kinjal but shah family avoid the gift and asking to rakhi bring back with you. At that time both shah and rakhi exchange their words in front of family members and finally vanraj defends anupama. Also rakhi before going to her home met kavya and said to her shah turned around and went to his wife, anupama and when you coudn’t say anything to him why are you going me these dirty looks?. When rakhi speaks with kavya her office car came to pick her to office and kavya went to her office.

After that shah think himself kavya listen my words about anupama and at least she won’t create a new scene now. Later leela given surprise to anupama i.e washing machine, Anupama said to leela, hasmukh for buying the waching machine and leela said we can’t buy this washing machine, Informed to anu i.e shah buy this washing machine for you. Once know the truth anu met shah and said to him i can understand the reason for what Ms. Rakhi did but you why did you buy this expensive machine for me. To know today episode Anupama 20 January 2021 Written Episode follow zeal study portal.

Anu said to shah iam your wife but our relationship is over. Shah said anu, Anu said to him iam not anu my name is anupama. Also anu said to shah our story end and when your met with accident all the family members feels tension that’s why i will maintain silent. After that shah said to anu i am not went from here and i can’t leave you. Also shah said to anu don’t take decisions when you in angry, anu said i will pay the money for washing machine. Leela listen anu and shah conversation and went to speak with her.

After that samar asking to his mom what happen, Anu said nothing and speaks about shah i.e once again he try to come my life and try to become my husband. Leela comes to anu and speaks with her and said to her shah know his mistake. Also, leela said to anu what shah did for you i will slaps him and hasmukh asking to leave the home. Anu asking to leela please don’t shout on me. Leela said to anu shah can’t go from here and he stay in this home. Then leela said to anu if shah can’t listen me i will slaps him and also if you can’t listen me same thing happens.

Once leela angry on anu hasmukh said to leela anu is lakshmi for us but you try to slaps her. Then leela again said to hasmukh if anyone asking to shah leave the house i will send to anu outside. Hasmukh said if you send anu to outside i will sent to you outside.